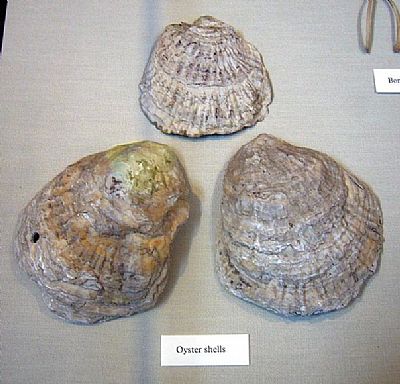 We tend to think of oysters as a luxury food today but until recent times they were a common part of the everyday diet in Britain including during Roman times. Hence oyster shells are often found during excavations on Roman sites.  The fact that oyster shells are found across Roman Britain means there must have been a well-established trade. We also know from written evidence that British oysters were highly regarded even as far away as Rome and were exported over great distances.

Oysters need to be eaten as fresh as possible or there is a serious risk of food poisoning. Closed oyster shells were transported in barrels filled with sea water and could keep for up to 4 weeks in this manner. There is also evidence that they were stored in large timber lined tanks at the coast before they went to market. They would have been transported by ship along the coasts and easily kept wet with fresh seawater and then carried over land or along rivers to serve inland communities.

Oysters were caught naturally but there is also evidence that they were cultivated in beds on the south and east coasts, particularly in the Colchester Essex area, of Britain during Roman times to meet demand. The cultivated shells were larger and more regular in size than those caught in the wild.