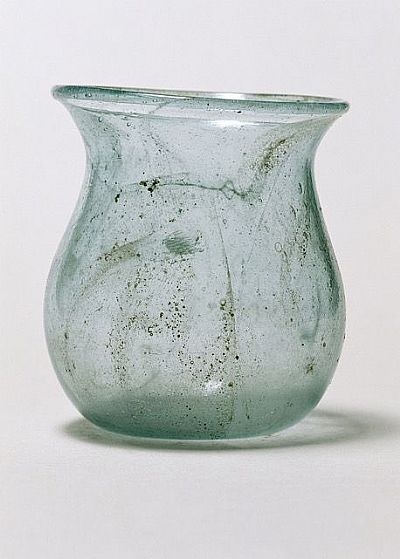 This small glass vessel was found in 1927 during excavations at a cemetery site approximately 500m west of the museum. It was found along with several other items also on display in the museum associated with a cremation burial. At the time it was thought to be the burial of a child.

In Roman times glass manufacture and glass working generally took place on separate sites. Most glassware found in Roman Britain was imported although evidence for glass working was found near Ashcroft Lane during excavations in 1962.

Glass was either imported in blocks from the continent then melted to make vessels or more likely local glassworkers recycled broken glass. We don’t know if this glass cup was made by a local craftsman or not but it would be nice to think it may have been.

Glass vessels like this one may have been used as tableware for serving drinks but could also have been for storage or medicinal use. Glass was probably more of a luxury item in Roman Britain as it was more fragile than pottery and would have needed to be kept in a safe place. It seems this vessel was carefully placed with the cremation burial and miraculously survived intact.