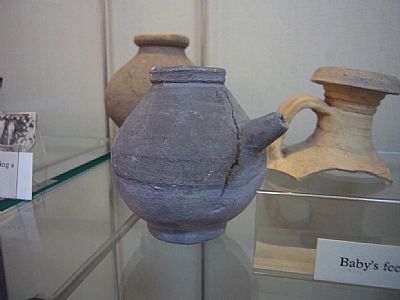 This object was found in 1927 during excavations at a cemetery site approximately 500m west of the museum. It was found along with several other items also on display in the museum, including a small glass cup, associated with a cremation burial. At the time it was thought to be the burial of a child on the basis that this was then believed to be a bottle for feeding a baby.

It is now thought that it was a bottle for filling lamps with oil. When filling lamps, the oil had to be poured accurately into a small hole and this type of container would make the job much easier. Pottery lamps were used as a source of light by all Romans and offered an alternative to candle light. Candles were made from beeswax or tallow but do not survive as well.

Vessels similar to this one made of pottery and glass have been found at many Roman sites. The shape suggests that it could have been used for feeding a baby, but it would have been very difficult to keep clean.