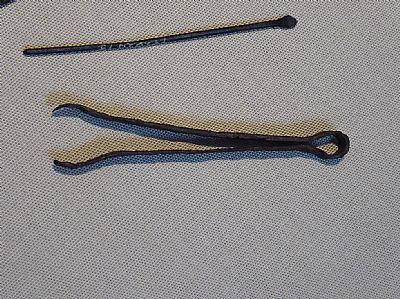 The Romans were very particular about their appearance and personal hygiene and they built bathhouses in every town like the ones that can be seen at Wall. Many people in Roman Britain would have owned their own personal care set which included an ear scoop, nail cleaner and tweezers. They would have carried these on their belt or in a little bag to the bathhouse and being small items they were often lost and turned up regularly on archaeological sites.

Tweezers were used primarily for removing body hair. Depilation was fashionable amongst Roman women and men, who used a clean-shaven appearance to distinguish themselves from barbarians. Tweezers were used to pluck eyebrows, remove unwanted hair, and sometimes as surgical instruments. They were often made of bronze, about 75 millimeters long, and flex together just like modern tweezers.

In the large Roman bath complexes, you could go to a special slave whose job was to pluck the hair from the armpits of bathers! The Roman author and politician Seneca wrote a letter (#56) to his friend Lucilius complaining about the noise from the public baths above which he lived including “the skinny armpit hair-plucker whose cries are shrill, so as to draw people's attention, and never stop, except when he is doing his job and making someone else shriek for him.” Apparently, it was a painful process that could cause a lot of noise!