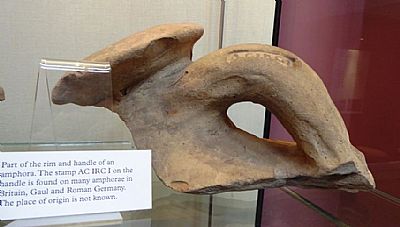 When the Romans came to Britain they brought with them foodstuffs that were more typical of the Mediterranean diet. As well as introducing many new plants and animals they also imported products such as olive oil, olives, wine and fish sauce. These were transported in large, thick-walled heavy pottery vessels called amphorae.

Larger amphorae could hold up to 80 litres but the usual capacity was more like 25 to 30 litres which would weigh about 25 to 30 kg. Their shapes are globular; squat, rounded at the top and slightly tapering to the base; and tall and narrow, either cylindrical or tapering. They had a pointed base to steady them in the ground and aid lifting. They were lifted by two handles, one on each side of the rim and this was often a task for two people because a full amphora would be very heavy.  In our example we have just the one handle and part of the rim.

Amphorae were made in the places that produced the commodities they contained and only very small quantities of amphorae were made in Britain. Analysis of the clay can show their origins. For example many of the globular amphorae are from southern Spain in the Roman province of  Baetica and would have contained olives and olive oil. Amphorae containing wines were imported from Italy, Spain, Gaul (France) and even Greece. Smaller amphora would have been used to transport Garum and Liquamen, salty fish sauces, an important ingredient in Roman cookery.

Some amphorae have stamps on the handle put on before the pot was fired (see our example stamped – AC IRC I) and this may be to identify the manufacturer who made it or the contents of the vessel.

Amphorae were used to transport goods around the Roman Empire by sea, rivers and over land and being robust vessels they were reusable as containers for various things once their original contents had been used. Since they were mass produced and cheap they were often broken up rather than returned and reused. In Rome a mountain of broken amphorae ‘Monte Testaccio’ stands 45 metres high and contains an estimated 53 million sherds! The Roman equivalent of a plastic bottle?