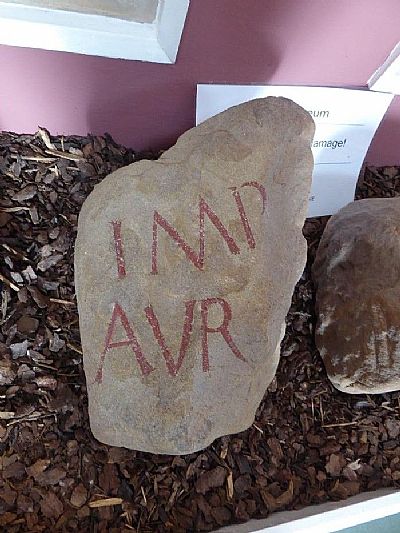 This piece of sandstone was found in excavations on the baths in 1912, but it must have originally stood alongside Watling Street. The fragmentary inscription, which was picked out in red paint after it was discovered, is part of the name of Roman Emperor who ruled at the time it was made. It would have been followed by a distance in Roman miles.

IMP is short for Imperator, “Emperor”, and AVR is an abbreviation of Aurelius. There would have been C, for Caesar, after Imperator, another name before Aurelius and another name after it. In 1926, archaeologist R G Collingwood drew the stone and he thought he could make out part of the letters CL below AVR, but these aren’t visible now.

If it were just IMP AVR, it could be a 2nd-century emperor: Marcus Aurelius (Imperator Caesar Marcus Aurelius Antoninus), who reigned from AD 161-180, his co-emperor Lucius Verus or his successor Commodus (reigned 180-192). During this time the baths at Wall were extended and the mansio was rebuilt in stone, so it would be an appropriate time for the community to erect a milestone.

Alternatively, if there really were the letters CL, these are an abbreviation for Claudius and the name would be Claudius II (Marcus Aurelius Claudius) who reigned from 268-270, but at this time Britain was part of the breakaway “Gallic” Empire which also included Gaul, Germany and Spain and had its own emperors, so a dedication to Claudius seems unlikely unless an official at Wall was showing that he still backed the “official” Emperor in Rome!