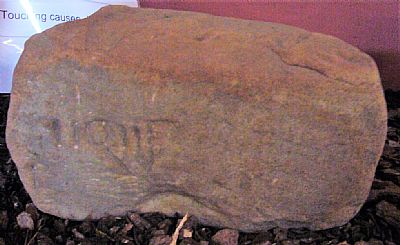 The letters engraved on this stone are one of the very few inscriptions found at Wall. The stone was found in excavations in 1980-81 just south of Watling Street, opposite the present car park, prior to construction of the bungalows. It was in a wall composed of reused stones, some of which still had mortar on them from a previous building. Pottery found on the site suggests that the wall and a nearby line of post pads (stones placed to support wooden posts) were built in the 4th or possibly the 5th century, right at the end of the Roman period.

The letters on the stone are IIQIIS. “II” was often used on casual inscriptions like this to indicate E because it was easier to carve, and Q in Latin is always followed by U, so the inscription is EQUES, literally a horse-rider and a member of a social class in the Roman Empire, the equitates (“knights”), but in this case Eques might be a man’s name rather than a title. Another man’s name, Candidus, was scratched onto a stone of the bath house- he may have been one of the builders.