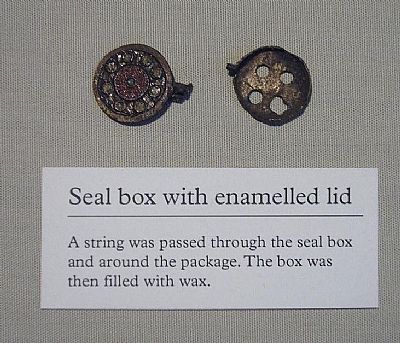 Seal boxes were used by the Romans to secure important information or valuable goods during delivery across the empire. They were usually made of bronze or copper alloy, and in this case it has an enamelled decoration on the lid, but some were plain. Seal boxes would have come in many different sizes and shapes: round, square, diamond and pear shaped.

Traditionally these boxes have been interpreted as being used to seal up the contents of wooden writing tablets to keep information and letters secure. The boxes have a base and a lid joined by a hinge. One or more cords could be passed through the holes in the base and then tied around the package to be secured. The box would then be filled with melted wax and the seal impression of the sender could then be made, from a ring for example, into the soft wax before the little box was closed. Whoever received the writing tablet or other package would then open the seal box to see who sent it and if the string was cut or the seal damaged, the receiver would know the package had been tampered with in transit.