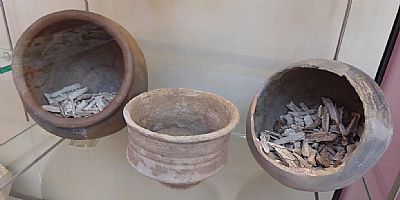 These urns containing cremated bone were found in the excavation of a Roman cemetery alongside Watling Street, to the west of the village. Other items were found alongside the urns, including more pots, a glass cup, glass beads and a ring. Adults and children were buried in the cemetery, which was used in the 1st and 2nd centuries AD. The burials could have included soldiers garrisoned in the fort at Wall and people who lived in the vicus (civilian settlement) outside it.

The Romans always buried their dead outside a settlement, so the cemetery shows the western extent of Roman Wall. Cremation of bodies before burial was usual in the 1st and 2nd centuries AD, but in the 3rd and 4th centuries burial without burning (inhumation) became the norm. There may have been inhumations as well as cremations in this cemetery but the acid soil dissolves unburnt bones, leaving just the grave pits, which might not have been noticed by the excavators in the 1920s.

Another cemetery, alongside Ryknield Street south-east of the village, was excavated in 2001 before construction of the M6 Toll motorway. It contained cremations and inhumations and was in use from the 1st to 4th centuries AD. Like the other cemetery, it indicated the extent of the Roman settlement, which probably consisted of houses spread out along Watling Street and Ryknield Street together with outlying farms.