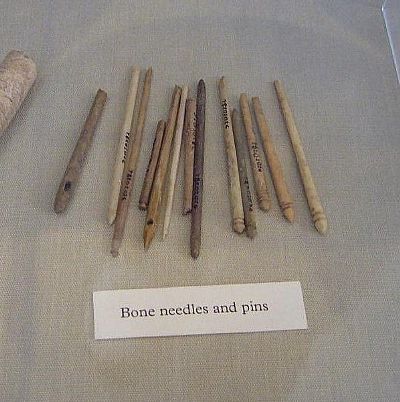 People have made sewing needles out of animal bones and antler since prehistoric times. In the Roman period they would have been mass produced in bone-carving workshops by splitting long animal bones then cutting, polishing and sharpening one end and adding one or more holes for thread at the other.  These needles were manufactured in a range of sizes according to their use and the type of material to be worked on.  As well as general sewing they were also used for weaving and embroidery. Some needles were also used for nalbinding which was an early form of knitting which used just one needle and could produce a thick durable fabric which was especially suitable for making warm socks – very useful in the cold climate of Britain.

Large numbers of pins are found during excavations on Roman sites. Those with bulbous, sometimes decorated, ends were used to keep hair styles in place or to pin clothes.

The Romans were extremely conscious of how they looked in public. Roman women almost always had long hair and during the rule of the Flavian emperors (69-138 BC) hairstyles were raised to a great height by rows of false curls pinned up into sometimes quite elaborate hairstyles. Only wealthier women in Roman Britain would keep track of the latest fashions by looking at portraits of the empress on coins or statues and busts set up in public places.

Hair and clothing pins would have been easily lost whilst attending the baths or were just thought of as disposable once they became worn or damaged. They could also be made of other materials such as iron, bronze or silver.