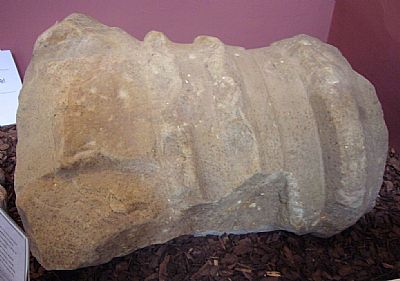 This capital (top) of a large column was found in excavations in 1980-81 just south of Watling Street, opposite the present car park, prior to construction of the bungalows now on the site. It was not found in an archaeological layer, but two parallel wall foundations which were found on the site might have formed a portico or corridor in front of a building, with the outer wall supporting a row of columns including this one. Alternatively it might have been one of a pair of columns on each side of the entrance into what must have been a substantial building.

The capital has an unusual design. It is similar to capitals in the granary at the Roman fortress at Chester, which dates to the early 2nd century AD. The design may be partly based on Corinthian column capitals but it lacks the distinctive acanthus leaves of that style, which would have been difficult to carve and beyond the abilities of some stonemasons.

An illustration on one of the interpretation panels on site, and also hanging inside the museum, shows how the column would have looked in an imaginary reconstruction of the courtyard at the Mansio. The design of the capital is based on the one in the museum. 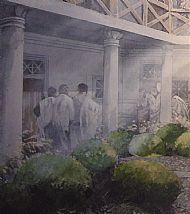