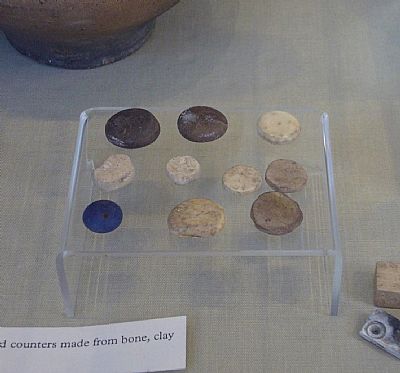 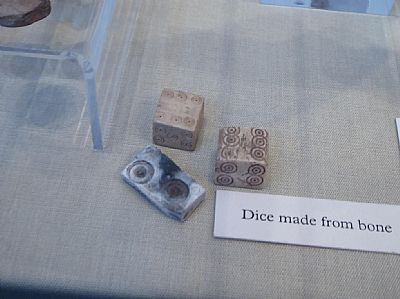 The Romans played many different board games using dice, counters and marked boards. Dice were usually made from bone or wood, while counters were made from bone, pottery, stone or glass. Game Boards would probably have been wooden but examples have been found marked onto stone blocks or clay tiles.

Dice and gaming counters are common finds on Roman archaeological sites so we know that board games were commonplace both in Roman Britain and across the Empire. A favourite place for Romans to play board games was at the baths which were not just places to get clean but also places for relaxation and enjoyment. Most Roman towns had sets of baths like those at Wall for use by men and women, either in separate areas or on different days, and by a wide range of social classes. Normally baths had an exercise area called the palaestra where people could sit and socialise. In the Mediterranean region a palaestra was usually open air, but in Britain’s colder climate they were roofed over, as was the case at Wall.

It is not known for certain how these games were actually played but information from ancient writers together with the finds helps to build a picture. The names of some of the games played are known and many of them resemble games that are still played today. Duodecima Scripta (twelve lines) was played like Backgammon and Merels is almost the same as Nine Men's Morris.

The most popular board game in Roman Britain was probably Ludus latrunculorum, latrunculi, or simply latrones (“the game of brigands”). It is similar to modern day chess or draughts and involves moving counters from one square to another in a grid.  The object of the game was to surround and capture your opponent’s pieces with two of your own. This game was particularly popular with soldiers since it is generally accepted to be a game of military tactics.

Simple gambling games like Tesserae involved dice being shaken in a cup, tossed onto a table and betting on the results. Roman dice were different from modern dice in that the numbers on any two opposite sides added up to seven.  Evidence from Roman wall paintings shows that they played with three dice.