This tableware was mass-produced in Gaul (France) in the first and second centuries AD and it was used by soldiers and civilians throughout Roman Britain. Its distinctive red shiny surface is a slip, a slurry of clay applied before firing, which fires to a glossy but not glazed finish. The attractive vessels contrasted with the coarser and often undecorated pottery made in Britain and would have been regarded as a symbol of Roman civilisation.

Samian ware vessels included bowls; dishes, cups and jars were also made. Hans Dragendorff, a German archaeologist, identified and numbered different vessel forms in 1896. The vessels were shaped in a clay mould, which for bowls sometimes included decoration showing hunting scenes; mythological figures; animals that would be familiar to people living in Letocetum, such as hares, and exotic animals, such as lions; birds; and foliage.

Samian ware is named after the Greek island Samos but none of the samian found in Britain came from there.  In the first century AD most of the samian ware used in Britain was made in southern Gaul, and in the second century most came from kilns at Lezoux (west of Lyon) in central Gaul. By the end of the second century British potters were producing a wide range of pottery which included vessels in a similar form and with similar types of decoration to samian ware. 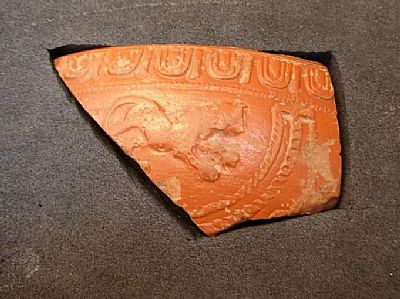 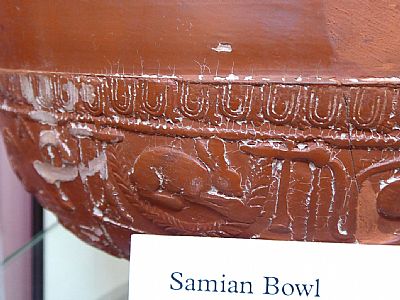