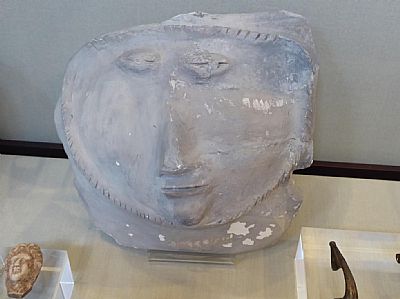 This rather strange face once adorned a fairly large storage jar – of a type called ‘face pots’ by archaeologists.

This kind of pot first came to Britain after the invasion with the military. Those pots with fairly large faces like this one were early dating from the 1st and 2nd centuries AD. Soldiers bought these pots with them from the Rhineland where they have been found in large quantities along the Roman frontier in what is modern day Germany. Here they are often found whole and buried in cemeteries but ours was broken and has been repaired.

Whilst soldiers probably bought the idea of face pots to Britain they were soon being made by local potters and are found in civilian settlements as well as forts. They would have been ideal for storing dry goods such as grain, flour and nuts.

Heads frequently appear in ‘Celtic’ (Iron Age) art and have been connected to a supposed cult of the head. They were associated with particular gods (see Carved Stone) and if this is the case the contents of a jar with a face on it may have had some religious significance or the face may have been thought to have protected the contents. On the other hand it may be that people just liked to use heads and faces as a favourite decoration for objects of all kinds.