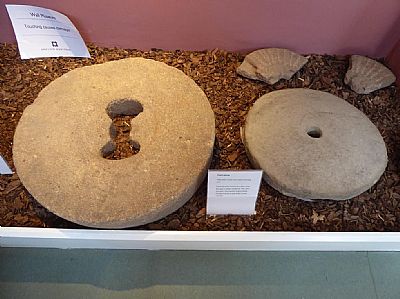 Querns are hand-operated mills, in which grain (mainly wheat, barley and rye) was ground to produce flour.  They are common finds on all types of Roman sites, showing that most of the flour used to make bread in forts, farms, and towns was ground on a small scale at the place it was used.

Rotary querns were introduced by the Romans to Britain and were used by soldiers and more ‘Romanised’ households. Typically they were around 45cm in diameter consisting of two circular stones one on top of the other. The underside of the upper stone was slightly concave and rotated over the convex upper side of the bottom stone which was fixed and stationary. The upper stone was held in place above the lower one by a spindle made of wood or metal set into a hole in the lower stone. The upper stone was turned by one person, perhaps sitting on the floor, using a handle which in our example was probably attached to a crossbar fixed across the central hole. This needed to allow  for the grain being used to be added though the central hole in the top stone by a second person who also collected the meal or flour which exited along the edge of the two stones and was gathered into a cloth, skin or wooden box below the mill.

There were regional variations in style and design. Initially the military imported querns made of volcanic lava from Mayen and other places in the Eifel Mountains in Germany, west of Koblenz on the Rivers Rhine and Mosel. Later on regional variations were made with local hard stones such as Millstone Grit from Derbyshire. The resulting flour would have needed sieving before using to make bread, not least of all to remove grit from the stones.